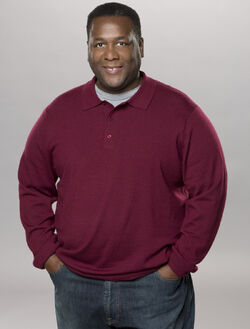 Teddy, played by Wendell Pierce, is Oscar's agent. He is often over at the apartment, especially when Oscar is holding a poker game. He has a wife, whom he has known 25 years. They have a daughter together. often referred to as Teddy Roosevelt or his initials T. R., was an American statesman, conservationist, naturalist, historian and writer, who served as the 26th president of the United States from 1901 to 1909. He previously served as 33rd governor of New York from 1899 to 1900 and the 25th vice president of the United States from March to September 1901. Roosevelt emerged as a leader of the Republican Party and became a driving force for the anti-trust policy while supporting Progressive Era policies in the early 20th century. His face is depicted on Mount Rushmore alongside George Washington, Thomas Jefferson, and Abraham Lincoln.

He is a rebooted version of Murray the Cop.[1]